It’s Fall (like you haven’t noticed! 😉 ), which means it’s time for hearty dishes. I don’t know about you, but when I think about fall, squash comes to mind. I’m a squash fan, but often don’t know how to prepare it other than as a simple side dish. Wait, what?! Someone has solved this problem for me? I present to you… 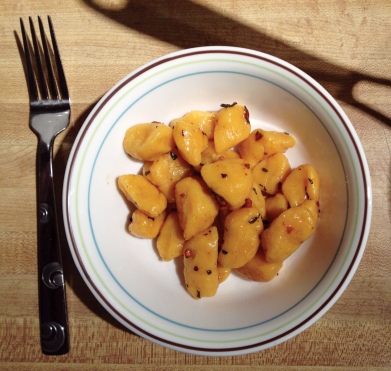 I was visiting one of my favorite blogs, iowagirleats.com (if you haven’t checked it out, you really should!), last week and wouldn’t you know it, she went and solved the problem of what to do with squash! So…truth time. This recipe didn’t exactly work out well for me—but this is good news because I have some suggestions to make this dish even better than the version I made (see Cook’s Note). Don’t be scared, give it a try!

For the Garlic Butter & Sage Sauce (for two, 1-cup servings):

1. Preheat oven to 400 degrees. Slice top and bottom off squash, then cut in half lengthwise and remove seeds with a spoon. Place squash halves cut side up on a foil-lined baking sheet then brush with extra virgin olive oil and season liberally with salt and pepper. Roast for 50-60 minutes, or until a knife inserted into the thickest part of the squash meets no resistance.

2. When squash is cool enough to handle, scoop from peel and place in a food processor. Process until very smooth (or mash by hand) then place puree in a large saucepan over medium heat and cook until it is no longer extremely moist, about 10 minutes, stirring occasionally. Spread squash puree on a plate then refrigerate until cool (doesn’t have to be cold).

3. Measure out 2 cups cooled squash then place in a large bowl and stir in whisked egg and salt. Add flour, 1 cup at a time, and stir until the dough pulls away from the side of the bowl. Turn out onto a heavily floured surface and knead until dough comes together. (Dough might be sticky, just keep flouring hands lightly.)

4. Remove large hunks of the dough then roll into a rope and cut into 1″ sections to form the gnocchi. Place onto a wax paper or foil-lined baking sheet and freeze until solid then transfer to a freezer bag, or cook gnocchi immediately. Cook frozen gnocchi the same as fresh (do not thaw.)

5. To cook gnocchi: Bring a large pot of water to a boil then salt lightly. Melt butter in a large skillet over medium heat, then add garlic and sage. Cook until garlic is just starting to turn golden brown.

6. Add 1 cup gnocchi at a time to the salted, boiling water, then cook at a gentle boil until gnocchi float to the top, about 2 minutes. Transfer using a slotted spoon or spider to the garlic butter & sage sauce. Cook remaining gnocchi then add to the skillet. Season with salt & pepper then toss to coat, and plate.

Space was a little tight for this recipe!

Okay, so first things first—this should probably be a weekend meal. I roasted the squash on Saturday (shout out to the parents for lending me their oven!), but made the actual gnocchi on Tuesday after work. I think this was my first mistake, which led to my second mistake: I somehow managed to completely skip step 2 and didn’t cook out the water. You probably know where this is headed: because of the extra water I had to use extra flour and do extra kneading, which in the end made these not the light and dainty gnocchi they were intended to be, but rather heavy, doughy and filling. This is why I don’t cook on weeknights people! (Cue tiny violin).

So, what would I do different next time? 1. read the recipe through to the end several times. 2. make this on a weekend instead of a weeknight when I’m tired from work. 3. I would buy a smaller squash (the only one at the store was six pounds (!). I think this recipe would have been more flavorful if I had started with a smaller squash (I had copious amounts of puréed squash left over and this too was devoid of flavor). 4. I think next time I would make the gnocchi smaller. 5. Wouldn’t you know it, I burned the darn garlic! First time I’ve ever done that! I thought I was being so cleaver using the same pan to boil in and make the sauce. Didn’t. Work.

After trying this, my mom suggested adding bacon to the finished product. Maybe with some caramelized onions? That would be tasty! I thought this might be nice with a balsamic reduction as the sauce. And what if you roasted an apple or two with the squash and added it to the mix?

So this meal turned out to be a flop (though a couple people at work enjoyed the results—or they were just being nice). But I am not discouraged, I will try making this again later this fall (after I’ve had some time to lick my wounds). And you shouldn’t be discouraged either! Give this recipe a try—I’m positive it will be worth the trouble. And if you do, let me know how it comes out! Also, have you had any epic fails in the kitchen? I’d love to hear about it—leave a post in the comments section! After all, it’s the mistakes that make the successes taste so good! 🙂